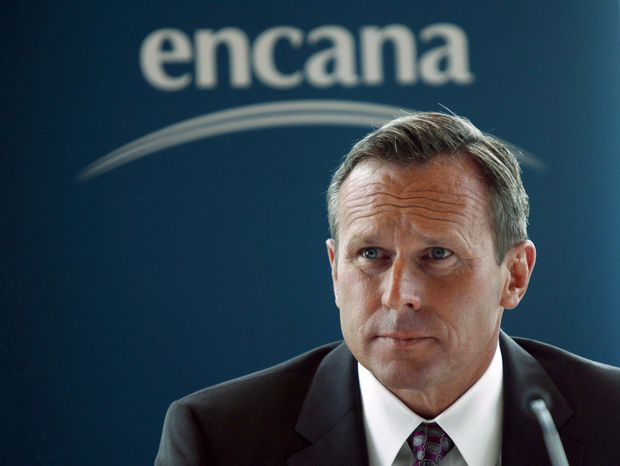 Doug Suttles, CEO of Encana Corp., speaks to reporters in Calgary in 2013.

Discounts on Canadian crude oil widened to multi-year highs on Wednesday as oil and gas executives took turns at a conference pointing out Canada’s competitiveness gap in attracting energy investors.

Prices for both Western Canada Select, an oil sands bitumen blend, and Edmonton Sweet crude oil, fell relative to New York-traded West Texas Intermediate because of a lack of pipeline capacity, growing production from the oil sands and a reduction in demand due to U.S. refinery maintenance shutdowns, said Tim Pickering, founder of price tracker Auspice Capital in Calgary.

“All of those things have culminated into a system that is completely overloaded,” Pickering said.

“Anything people can move out, they’re moving out, but we’ve basically just got the perfect storm.”

He said the WCS differential grew to as much as US$48 per barrel on Wednesday morning, the highest since at least 2011, and the Edmonton Sweet differential was at US$27.50 per barrel, a multi-year high that’s more than three times its typical size.

On the sidelines of the Energy Roundtable conference in Calgary, meanwhile, CEO Kevin Neveu of Precision Drilling Corp. said the differentials are having an immediate chilling effect on companies’ ability to fund drilling budgets in Canada.

“It’s proportionate to the cash flow. So if (a drilling customer) expected a netback of $50 Canadian or $55 or $60 and they’re only getting $45 or $50, they’ll adjust back to that outlook quickly, within the quarter,” he said.

He said the drilling industry in Canada is headed for revenue this year in line with 2017, which was the second-worst year for drilling profitability after a disastrous 2016.

“Today, every well we drill in British Columbia, we pay over $100,000 in carbon tax just on the diesel used to drill and complete that well,” he said during a speech at the conference.

Calgary-based Encana is focused on four major oil and gas plays, the Montney and Duvernay in Western Canada and the Eagle Ford and Permian in the southern United States.

Suttles said Encana gets no credit for the clean-burning natural gas it produces, nor for the three B.C. gas plants it built that are powered by hydro electricity.

He added it also won’t get credit if the gas is shipped in future to a hydro electricity-powered liquefied natural gas export terminal on the West Coast and on to Asia, where it may replace coal in producing electricity and cutting global emissions.

Due to corporate tax cuts under U.S. President Donald Trump, Suttles pointed out Encana also pays higher income taxes in Canada than it does in the U.S.

“As a Canadian, it’s easy to get really down,” said Ian Dundas, CEO of Enerplus Corp., a Calgary-based company with 90 per cent of its production in North Dakota and little in Canada.

“We’ve let the Americans outcompete us and outregulate us and we find ourselves in this position.”

He said the solution is to stop making the situation worse – citing Ottawa’s Bill C-69 to reform the National Energy Board and its proposed clean fuel standards as examples of that – and start coming up with ways to help Canadian companies compete with U.S. rivals.

He added he hopes next year’s federal election encourages the public to discuss changes to national energy policies.